Three-dimensional capture and reconstruction is a powerful new technology that could help investigators to better understand crime scenes and solve cases. Compared to pictures alone, a 3D model of a crime scene can more powerfully show what happened there.

Investigators are already starting to capture crime scenes in 3D. This technique, called volumetric capture, is becoming faster, easier and cheaper. SLAM, or Simultaneous Location and Mapping, calculates a device's position and orientation in relation to its surroundings while also mapping the environment using only visual input from a camera. Feature-based visual SLAM uses only a camera and typically tracks points of interest through successive frames to triangulate the 3D position of the camera. This information is then used to build a 3D map.

Another type of SLAM, LIDAR or "Light Detection and Ranging", determines ranges of variable distance by targeting an object or surface with a laser or other light type, and measuring the time for the reflected light to return to the receiver.

Photogrammetry, yet another method, triangulates key points from a vast series of 2D images to reconstruct a 3D volume retroactively. Placing the camera in spacial relation to a single matched feature allows for the placement of that point in space. This creates a "point cloud".

Some evidence is better suited to 3-D interpretation than others. Consider, for instance, bullet trajectories, the directionality of blood droplets and key distances between victim and accused. For this evidence, 3-D capture of crime scenes allows for greater, more specific, analysis of this kind of evidence.

But what if you don't have a lot of photographs?With the help of AI, we may soon be able to rebuild robust scenes from very little data. Nvidia recently revealed research that can take a far smaller set of photos than is usually required for photogrammetry and interpolate between them to create a seamless 3D recreation using machine learning. The technique, known as NeRF (neural radiance field), involves training a neural rendering model on a small number of still photos, and on data on the camera angle for each shot.

Virtual reality, or VR, is the best way to view 3D renderings, as it allows the expert to view the scene as if they were actually in it, versus simply flattening it on a 2D screen. In a study published by the University of South Australia, researchers, lawyers, police, and forensic scientists simulated a hit-and-run scene reconstructed from laser scans in order to compare the verdicts of 'jurors' using 3D headsets versus those using photographs from the scene.

"We discovered that VR individuals were considerably better at recalling the correct arrangement of evidence pieces," the researchers noted, adding that they were also better at recalling some narrative details. "Participants who viewed the scene in the baseline mode were divided in their verdict decision, whereas participants in VR came to an almost unanimous decision."

An immersive scene allows parties to present large amounts of information in a manageable, natural manner, and participants took advantage of the exploration to better build their mental model. An additional reason could be that VR also closes out the outside world to allow for greater focus.

Augmented reality, a related technology likely soon to be more prominent, can also help in unique ways.
Rather than close off your view such as in VR, AR allows you to see a 3D digital layer superimposed on the real world in real time. The combination of these two technologies is often called XR or mixed reality.

The Dutch police force, the Netherlands Forensic Institute, and the Dutch Fire Brigade have been experimenting with an AR system developed by the Delft University of Technology which enables an officer to access the expertise of multiple experts without having them physically present at the scene of an investigation.

By combining these technologies, an unprecedented number of old, forgotten cases could finally be solved. Perhaps you could even one day be a futuristic "bounty hunter" of sorts! 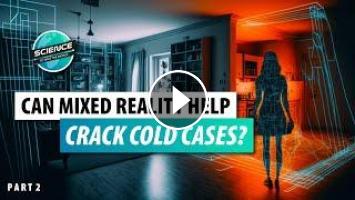 Three-dimensional capture and reconstruction is a powerful new technology that could help investigators to better understand crime scenes and solve ca...