Get Apple TV 4K: https://geni.us/appletv4k2
Last year's redesign of the Apple TV 4K Siri Remote was such a big deal to me that I did a whole separate video on the remote itself, which I'll link below. The new Apple TV Siri Remote just made using the Apple TV so much easier than what we had before. The power button at the top will turn on the TV and the receiver, bringing you right to the Apple TV interface. The volume controls, with new mute button, means you don’t need to switch to any other remote while watching TV. When you’re done, if you don’t want to leave it running for those gorgeous screensavers, the power button will also shut everything down. You can literally hand someone just the new Apple TV 4K Siri Remote and they can power everything on, watch whatever they want, and turn everything off when they’re done.

The remote still doesn't include an accelerometer and gyroscope, which were present in the previous Siri Remote, which means that it’s incompatible with games that require that...but what has changed from last year is the charging port. Instead of Lightning, you now charge the Siri Remote with a USB-C cable. Again, it's a small change in and of itself, especially for a remote that I use every single day but only need to charge once or twice a year - but I suspect that the more accessories we see Apple release with USB-C, the more likely we are to see the iPhone pick up that port as well. 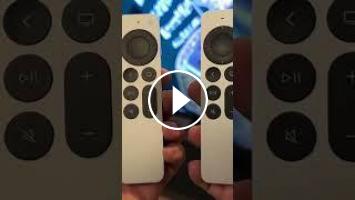 Get Apple TV 4K: https://geni.us/appletv4k2 Last year's redesign of the Apple TV 4K Siri Remote was such a big deal to me that I did a whole separate ...