Ag Fás Ar Ais Arís (VR) is a fully immersive, audiovisual composition for VR. The audio and visual elements are carefully arranged in an effort to achieve a balanced audiovisual expression that incorporates all aspects of the virtual environment. The aesthetic goal of this piece is to present an environment that straddles abstraction and representation. It tries to find a balance between these ideas such that there are enough aspects familiar from reality to instill a sense of presence. On the other hand, the abstract elements are intended to exploit the possibilities of the medium for creating worlds that could only exist in our imaginations.

This video is a live recording. The 3D positions of the controllers affect various audio and visual elements simultaneously. As the controllers move throughout the space, many audiovisual parameters are changing in real-time. The mappings between the controllers and the audiovisual elements are non-linear, implemented through the use of multilayer perceptron neural networks. The complex perceptual correspondences that arise from these mappings are supported by direct, one-to-one, audio reactive elements that are intended to create tight, transparent perceptual bonds.

The compositional material was generated carefully in an attempt to create a unified environment. Each element was developed to occupy a specific space both in the sound world and the visual world. The performance consists of three sections. Sections 1 and 2 were pre-composed explorations of the material. Section 3 is an improvisation combining the previous material covered in sections 1 and 2.

The piece was performed with a HTC Vive headset powered by an Alienware Aurora R11 PC with an Intel i9-10900KF CPU, an Nvidia GeForce RTX 3080 GPU and 32GB of RAM. 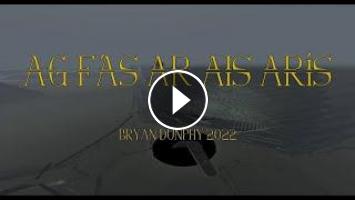 Ag Fás Ar Ais Arís (VR) is a fully immersive, audiovisual composition for VR. The audio and visual elements are carefully arranged in an effort to ach...